During my Marie Curie research project at SPRI, I will explore analogies between glacier calving and rockfall processes. Ice failures on glacier termini show very similar fingerprints to Rock-slope failure (RSF) processes, nevertheless, progressive failures on glacier fronts occur at a much higher rate than that observed on mountain cliffs, which may lead to the latter being used as a proxy for investigating the occurrence of RSF in Alpine areas.

Here you can visit the website at the Scott Polar Research Institute: http://www.spri.cam.ac.uk/people/abellan/ 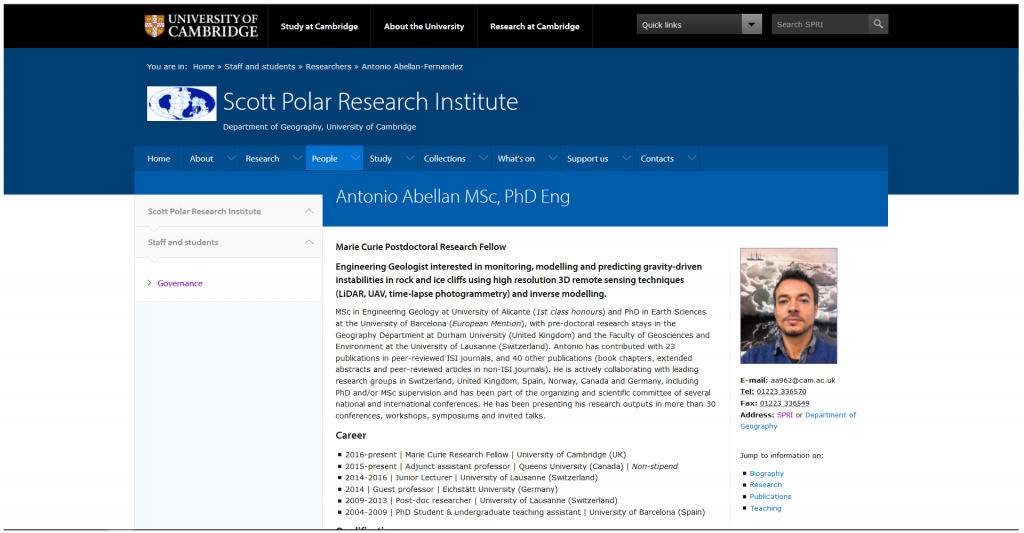 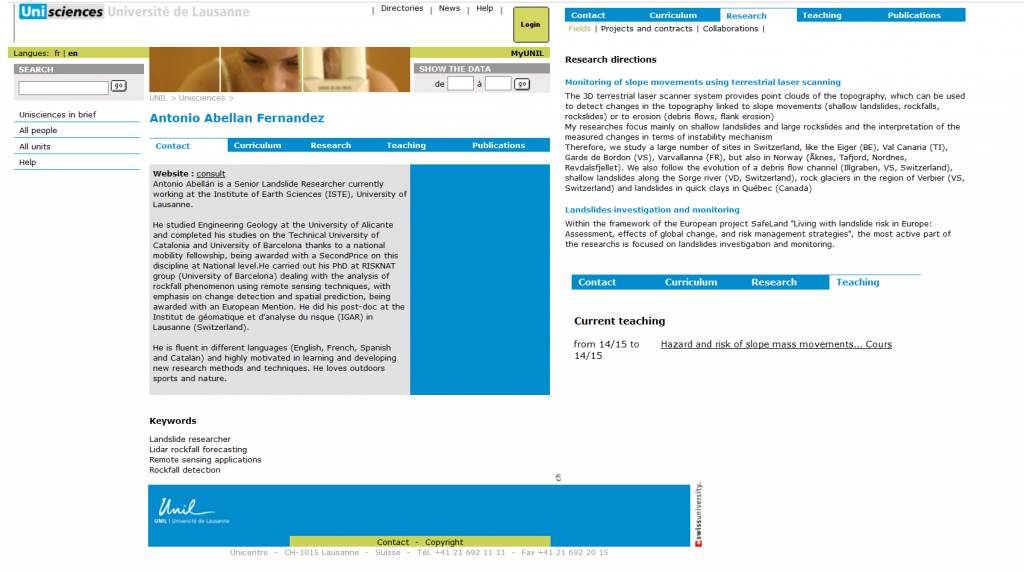 I have been engaged as an invited professor at the Faculty of Mathematics and Geography, Physical Geography Department, Germany, Catholic University of Eichstätt-Ingolstadt.

I was hosted at the Michael Becht group and I’ve been substituting some lectures carried out by Tobias Heckmann (he was engaged at Munich during this period). More information about my stay here: 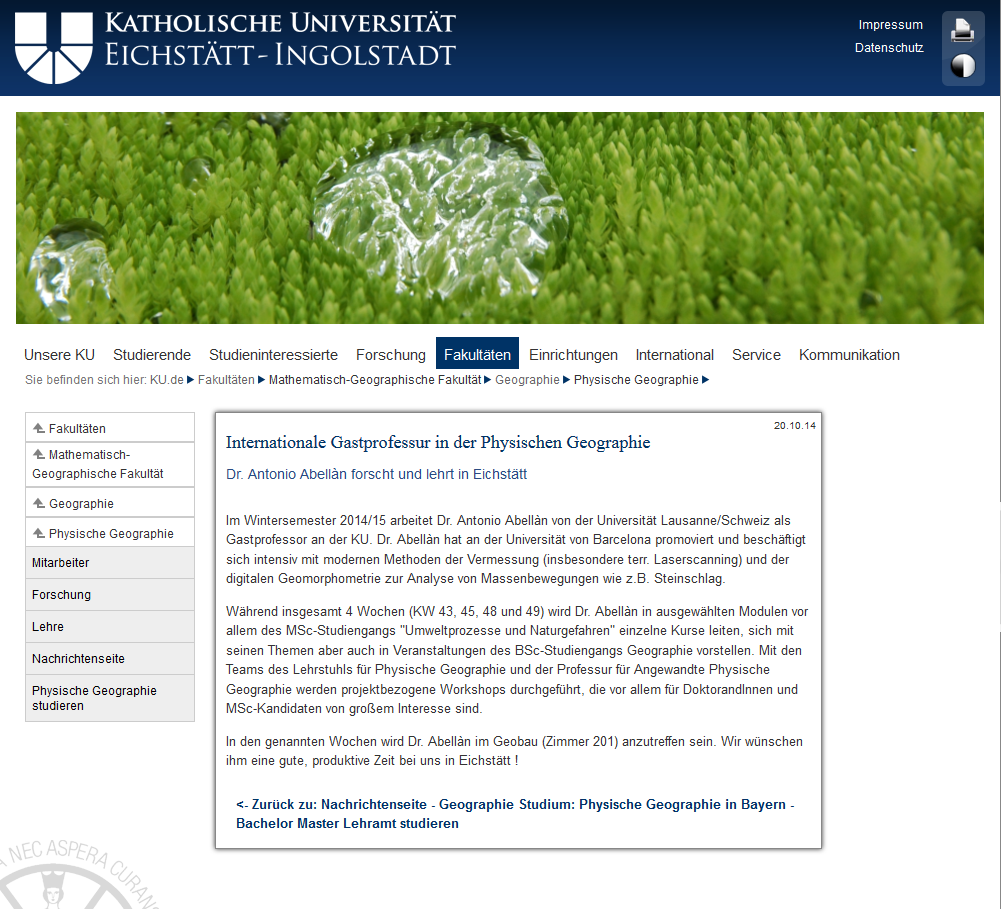 SUMMARY OF THE PROJECT

Landslides are complex bodies affected by temporal changes along all directions of the space: while some areas of the slope are affected by deformation (lateral or longitudinal compression and extensional areas), others areas are typically affected by sudden changes, such as rock falls. Although the use of relatively new 3D monitoring techniques have the potential of shedding light into how these complex bodies behave and evolve, a great challenge still remains in the development of new algorithms for the better understanding of the landslide phenomena in 4D (X, Y, Z, time), which will lead to a better forecasting of the process.

The global aim of this project is to better understand the kinematics of active slope movements in 4D both in soil and rock lithologies. We are interested in studying the behaviour of complex landslides: how apparent random rotations, translations and sudden changes measured in surface along different parts of the slope are connected to slope geometry, failure mechanism, external factors, etc. In order to achieve this goal, we will simulate landslides on analogue scale tests and develop new algorithms aiming to automatically quantify their 3D geometrical variation: progressive deformation and fast changes.

We will subsequently apply these algorithms to complex landslides in order to better understand landslide behaviour, as follows:

(a)   First of all, we will carry out a series of analogue scale experiments over non-rigid bodies using a sandbox under controlled conditions of slope inclination, granulometry, cohesion, etc., in order to simulate different failure mechanisms: rotational and translational slides, falls, flows, etc. During these tests, we will acquire 3D coordinates of the movement at a high spatial (e.g. 1 mm) and temporal rates (e.g. 1 measurement/min.) under different external conditions (triggering factors). The outputs of these experimental tests showing the variation of the slope geometry along time will be used in the next step of the project.

(b)  Secondly, we will develop new algorithms aiming to properly describe in detail complex mass movements evolution in 4D. We are currently creating a series of pre-processing algorithms (vegetation filtering, merging improvement, outlier detection, etc.) based on different algorithms for point cloud pre-processing (normal computing, ICP alignment, etc) and data segmentation techniques (e.g. Support Vector Machine). We will also develop a series of new algorithms aiming to quantify 3D deformation along time either in rigid and non-rigid bodies (e.g. rotational slides, lateral spreading, topples, etc.) using algorithms such as object tracking, RT technique, etc. Finally, we will develop another series of algorithms for the automatic rockfalls detection based on noise reduction (NN clutter removal) and hierarchical clustering techniques along the space and time in order to study the role of precursory landslides leading to larger failures.

(c)   Based on the previous development we will investigate real and more complex pilot study areas such as the Eiger rockslide (Bernese Alps, Switzerland), the complex earthflow of Pont Bourquin (Vaud Alps, Switzerland), the fragmental rockfalls at Puigcercos cliff in Spain, etc. We will merge the new datasets acquired within this project (24 months monitoring) with previous datasets already acquired by our group since 2006, in order to be able to geometrically model the landslide behaviour in a long-term, more representative way, e.g. precursory deformation, failure mechanism, precursory rockfalls, etc.

The outputs of the project will help in the understanding and modelling of the 3D evolution suffered by complex mass movements during the pre-failure and failure stages, which is a fundamental aspect for future implementation of 3D remote sensing techniques in early warning systems, a great challenge in current risk management strategies. 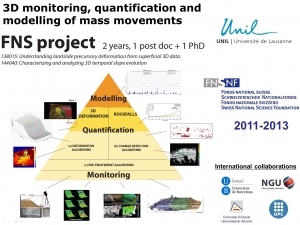 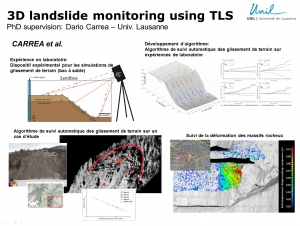 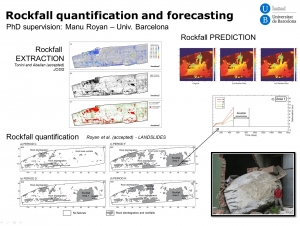 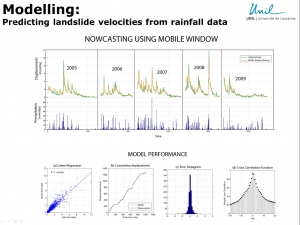 I was awarded with a fully founded four years fellowship in a competitive scheme for accomplish my PhD project at the Natural Hazards group of the Universidad de Barcelona. I also obtained founding for carrying out two pre-doctoral research stays in Durham University (United Kingdom) and in Université de Lausanne (Switzerland), two prestigious European institutions with a leading position on the use of 3D LiDAR. 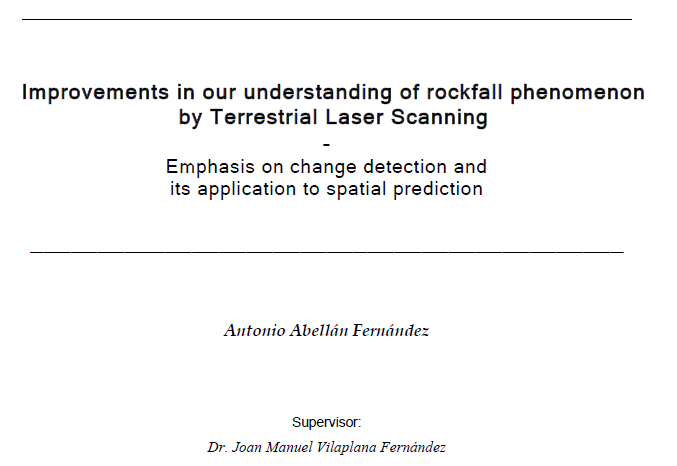 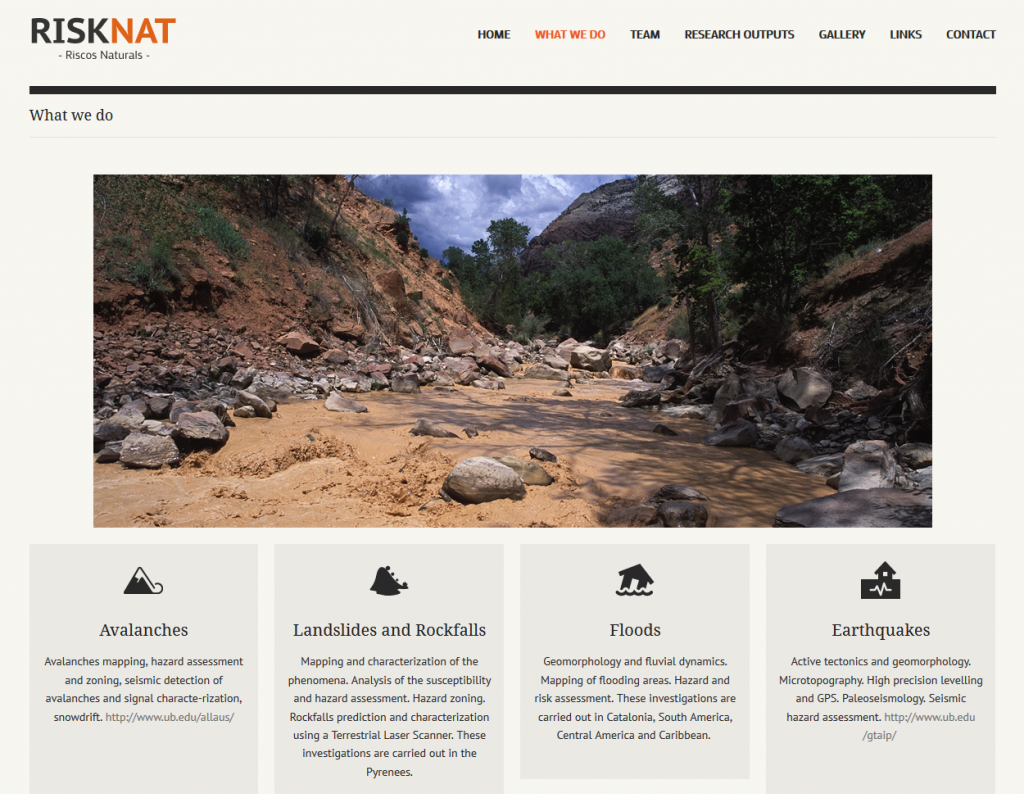 During my graduate studies, I completed with 1st class honours my BSc and MSc in Engineering Geology, obtaining a National Price for my outstanding undergraduate qualifications.