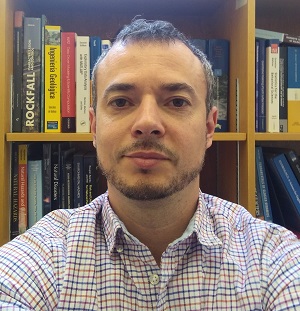 School of Earth and Environment, University of Leeds, United Kingdom

Antonio has been instrumental in the writing of 34 publications in leading international journals including Landslides, Engineering Geology, Natural Hazards and Earth System Sciences, Computers & Geosciences, Remote Sensing, etc. His research outcomes have been presented in more than 40 conferences, symposiums and invited talks. Antonio has been involved in the organizing and scientific committee of multiple workshops and conferences at national and international level -including session chairing- and he holds responsibilities on the Editorial Board of Computers & Geosciences journal (Elsevier) since 2017.

Antonio has attracted more than 650k€ from externally funded research grants along his career, including several projects successfully funded by National and European Science Foundations (e.g. Switzerland, Spain and the UK), both as a main applicant and co-applicant. He actively evaluates research project proposals in different European Science foundations and Canada.

Concerning his background education, Antonio gained a European Doctorate at the University of Barcelona that included extended research stays in Durham and Lausanne Universities and he was awarded with a 1st class honours MSc in Geological Engineering at the University of Alicante & Barcelona, obtaining an extraordinary award at national level (2nd-highest-ranking student). Last -but not least-, he is happily married and a proud daddy 🙂

I’m interested in investigating gravity driven instabilities, both in rock and in icy media, in order to predict the occurrence of (catastrophic) Rock Slope Failures (RSF). To do so, my current research interests range from the use of high resolution techniques and methods for 3D experimental data collection (remote sensing techniques, Structure-from-motion, new dynamic sensors, etc.), to the development of innovative algorithms for the characterization, monitoring and modelling of progressive failures, including the influence of external forces (precipitation) on the dynamics of the phenomena. I’m fluent in different languages (English, French, Spanish and Catalan) and highly motivated in learning and developing new 4D research methods and techniques. Also, I love outdoors sports, photography, nature and most importantly, I am married with a wonderful woman and our family is growing up… that’s great ! ^^

Here I leave you my contact details, Linkedin website and Google Scholar….. now you know where you can find me…