I firmly believe in continuous improvement of the scientific knowledge through open source and freely available data and code, so here I leave you some of my contributions to this field… Feel free to contact me if you are interested in any further information.

Since 2015, most of my publications are freely accesible at my ResearchGate profile: https://www.researchgate.net/profile/Antonio_Abellan/publications

In case you’d need some more information, please do not hesitate to contact with me, I’ll be happy hearing from you

This study presents a point cloud de-noising and calibration approach that takes advantage of point redundancy in both space and time (4D). The purpose is to detect displacements using terrestrial laser scanner data at the sub-mm scale or smaller, similar to radar systems, for the study of very small natural changes, i.e., pre-failure deformation in rock slopes, small-scale failures or talus flux. The algorithm calculates distances using a multi-scale normal distance approach and uses a set of calibration point clouds to remove systematic errors. The median is used to filter distance values for a neighbourhood in space and time to reduce random type errors. The use of space and time neighbours does need to be optimized to the signal being studied, in order to avoid smoothing in either spatial or temporal domains. This is demonstrated in the application of the algorithm to synthetic and experimental case examples. Optimum combinations of space and time neighbours in practical applications can lead to an improvement of an order or two of magnitude in the level of detection for change, which will greatly improve our ability to detect small changes in many disciplines, such as rock slope pre-failure deformation, deformation in civil infrastructure and small-scale geomorphological change.

PUBLICATION: It can be downloaded here: read +

Short course: Use of 3D point clouds in Geosciences: Acquisition, Processing and Applications 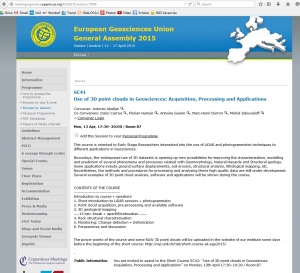 . The course, which was oriented to Early Stage Researchers interested into the use of LiDAR and photogrammetric techniques to different applications in Geosciences, was presented during the EGU 2015 General Assembly.  Lots of data and pdf files were available for all the students…. Did you miss it? Stay tunned with forthcoming free courses!

More info at the official website of the short course: http://meetingorganizer.copernicus.org/EGU2015/session/19506

(Apologies, but one year after the curse was due, we decided to remove the power point presentations….. you can contact the conveneers of the course in case some specific slide is requested)

Rock mass characterization requires a deep geometric understanding of the discontinuity sets affecting rock exposures. Recent advances in Light Detection and Ranging (LiDAR) instrumentation currently allow quick and accurate 3D data acquisition, yielding on the development of new methodologies for the automatic characterization of rock mass discontinuities. This paper presents a new methodology for the identification and analysis of flat surfaces outcropping in a rocky slope using the 3D data obtained with LiDAR. The methodology is based in …. [read +]

This Special Issue contains a collection of articles discussing the use of three-dimensional remote sensing techniques for the investigation diverse geo-hazards. We received a total of 13 manuscripts for consideration, which were thoughtfully reviewed by external experts in their respective fields. In addition, the Guest Editors of this Special Issue carried out a complementary editorial review.  These publications reflect a wide spectrum of different sensors covering topics of investigation techniques and analysis methods that can be used for characterizing and monitoring geo-hazards. Together with well-established LiDAR systems, fast evolving image processing techniques were also utilized in our Special Issue. Several submissions were related to the development of specific methods for data treatment, examples including the pre-processing of High Dynamic Range (HDR) imagery, the automatic extraction of rockfalls from multi-temporal LiDAR datasets and the treatment of massive amounts of geometrical data for carrying out efficient 4D monitoring. Several other contributions deal with the investigation of a given physical phenomena including slow-moving lava flows coming from recent volcanic eruptions , shear displacements due to historical earthquakes and mass movements both on mountainous areas and rocky cliffs

Special Issue: “Use of LiDAR and 3D point clouds in Geohazards“

Puigcercos pilot study area is now one of the most scanned cliffs in the world. I started monitoring this cliff during my PhD research in order to study rockfall phenomena. I was interested in rockfall detection and prediction, and we were able to predict the occurrence of several rock falls there, as was partly published in Geomorphology in 2010.

DATASETS: You can download an example of the RAW LiDAR datasets here [more data can be available on demand]: https://www.dropbox.com/s/33ct2dppse9dfdp/Puigcercos_2008_07.txt?dl=0 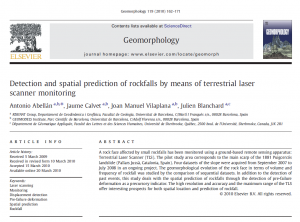 There exist a more and more need for high-quality topographic data for a wide range of applications, include landslide mapping, monitoring and modelling. Two governamental agencies has recently released open topographic data, as follows: